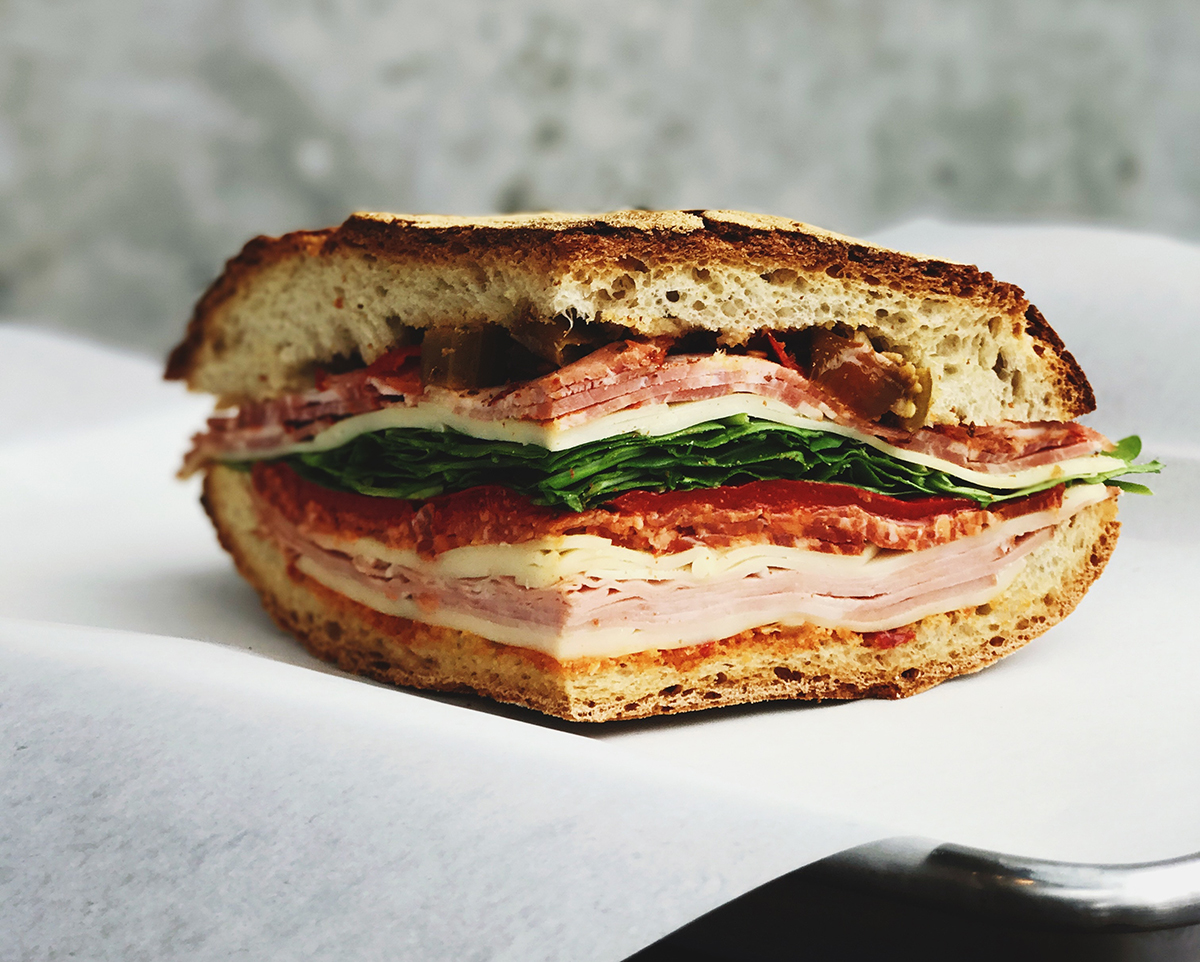 If you went to primary school in the 90s, you probably remember this diagram from a nutrition class.

Released in the U.S. in 1992, the food pyramid was designed as an easy way for people to remember which foods they should be getting their calories from and the relative importance of each. Carbs were healthy and good, and so they formed the base; fats were bad and placed at the top. The fat category lumped everything together from healthy fats like Omega-3s and olive oil to saturated fats and sugar. This concept helped trigger the fat-free craze. Although this concept seems pretty normal to us now, at the time in the late 1970s it was actually considered quite radical – so much so that then-president of the National Academy of Sciences, Philip Handler, described the proposed shift as a “vast nutritional experiment.” Essentially, the Dietary Guidelines suggested that people eat less fat and get more calories from bread, grains, rice, pasta, etc. This was intended to protect Americans from weight gain and heart disease. This is why the “high carb, low fat” diet seem familiar and normal to you, and probably why you think eating fat makes you fat.

What was the result of this recommendation?

Beginning at around the time when the guidelines were first recommended in 1977 and their release to the public in 1980, the percentage of Americans classified as obese increase almost 20% as they followed the government’s advice to cut fat and increase carbs. Why have obesity rates in the United States skyrocketed over the last 18 years? Because the idea that “fat makes you fat” is wrong. Fat is just another nutrient source, same as carbohydrates and protein.  What makes you fat is taking in more energy (calories) in a day than you use. That’s called being in a caloric surplus.

While this might seem like a somewhat challenging thought, fat isn’t solely to blame for weight gain, and it’s not fair to even say it’s a major factor in weight gain.  At fault is a confusing mishmash of terminology, the negative connotation of fat over the past generations, and a pesky little diagram that’s been imprinted in the minds of generations of Americans.

Let’s take a look at how fat got a bad rap to see what you really should be thinking about when you’re trying to lose weight.

Eating Fat Is Not the Same as Becoming Fat

Part of the reason people get confused and think that the fat they eat makes their body store fat is because we use the interchangeably to describe both body fat and dietary fat. The fat that is stored by our bodies is more accurately called “adipose tissue.” Adipose tissue stores are made up of primary adipocytes or fat cells and are responsible, among other things, with storing excess energy for times when you’re not able to give your body the energy it needs in a given day.

Body fat/adipose tissue is essential for survival.  Anyone with a body fat percentage of 0% would not be alive. When you cut your body fat level down to what’s called your “essential fat” – the fat needed to maintain a healthy and functioning body – complications arise.

Take the example of bodybuilders, who in a sense could be defined as “professional body fat cutters”.  When bodybuilders get into competitive shape, they try to lose as much body fat as possible in order to achieve more muscle definition.  Often, this can lead to some health complications that they don’t frequently advertise.

For example, in a 2013 study a competitive male bodybuilder preparing for competition was continuously observed 6 months prior to competing and 6 months after. During that time frame, the bodybuilder was able reduce his body fat percentage from 14.8% to 4.5% by competition time.

In the process of losing all this fat, the researchers observed various complications:

Contrary to popular belief, the study shows that a very low body fat percentage can disrupt important biological process and can actually be detrimental to your health!

The fat you eat is dietary fat and is one of the three essential macronutrients your body can get energy from.

When we talk about calories, we’re actually talking about some combination of the three macronutrients: carbohydrates, protein, and fat.

Let’s examine a standard nutrition label. What do you see? Although they’re not labeled as such, you’ll see the three macronutrients listed there – which we’ve underlined – along with the grams of each.  Each macronutrient contributes a certain numbers of calories to the total caloric content of the food.

You can actually multiply the grams by the calories and add them together to get the total calorie number listed at the top of the label (this one actually comes out to 232, but the government allows rounding to the nearest 10).

This bears repeating: fat is a macronutrient. It isn’t necessarily bad on its own.  Furthermore, you need dietary fat. That’s because your body can make all the fatty acids it needs, except for two: linoleic acid and linolenic acid.  These two necessary substances have to be found in your diet.

Would you believe that people actually used to eat more fat than they do now and at the time obesity rates that were much lower? It’s true, they did, and it’s true – obesity rates used to be much lower.  So if increased fat isn’t making you fat, what is?

Too many calories, probably from carbs. Eating more calories than your body uses and needs in a day causes you to gain weight, and Americans continue to eat more and more calories with each passing year.

According to the USDA, from 1970 to 2000, the total number of daily calories that Americans ate increased by 530 calories, an increase of 24.5%. During the same time period, the percentage of Americans categorized as obese increased dramatically.

Americans started to eat more calories.  This is surprising when you consider that carbohydrates contain less than half the calories (4 Cal) that fat (9 Cal) does, gram for gram. Shouldn’t shifting away from fats and towards carbs just reduce overall caloric intake, just by simple math? It doesn’t work that way if you just eat more carbohydrates. You see, consumption of a high carbohydrate diet can trigger something called “reactive hypoglycemia.” This is a condition experienced by people who do not have diabetes and are otherwise healthy. Among its symptoms is a feeling of hunger.

Guess what’s the best way to make that hunger go away? Eat more carbs – your body will be craving them.  And since carbs were supposed to be the largest macronutrient source anyway, most people didn’t think twice about having a snack that consisted of bread, rice, or something else carb-heavy.

By advising people to eat less fat and eat more carbohydrates, the government actually made the obesity problem far worse.  Recognizing the sharp increase in obesity, the food pyramid was revised in 2005 and ultimately retired in 2011 in favor of what the USDA now calls “My Plate,” which gives people a much better visualization of the relative importance of each food category by showing roughly how much space each should take up on a plate. So I Can Throw Away the Low Fat Options?

If you’re smart about it, yes, but you still have to be careful.

The fat isn’t making you fat due to just being fat; it’s the extra calories from fat (as well as all the macronutrients) that is causing you to gain weight.

What this means is, if you are responsible with your diet, you can choose foods that contain fat, guilt-free.  You just need to be smart about your caloric intake throughout the entire day.

For example, if you really like the taste of whole milk and have been forcing yourself to drink 1% milk because you think you’re supposed to, you can drink whole milk guilt-free so long as you know that that whole milk contains 46% more calories than 1% milk and you understand that you’re making a deliberate choice to get more calories from milk than from somewhere else.

The current (2015-2020) Dietary Guidelines for Americans agrees, as it does not encourage a low-fat diet any longer.  It even encourages a lower intake of carbohydrates. Ultimately, the only person who has any real influence on how you divide your nutrient intake/calorie limit is you.

A lot goes into planning, preparing, and following a diet. Trying to balance what you like to eat with what you should be eating to maintain a healthy weight and body composition can be tricky. Don’t punish yourself with a extremely low-carbohydrate diet because it will probably be unsustainable. But if you want to make improvements, a good guide would be a diet that is low-sugar and low in saturated fats and high in healthy fats (like Omega-3s) and protein.

When you have a good idea of what your individual caloric needs are, which you can learn by using a combination of your Basal Metabolic Rate and your activity level, this will become a lot easier.

Understanding how fat and the other macronutrients make up these calories will only further ease the problems with designing a nutrient dense balanced diet. Remember, fat isn’t bad on its own.  Focus on building a diet that you actually want to eat, keep it within a reasonable number of calories, add in more physical activity, and you’ll be closer to your weight loss goals than if you simply just reach for packaging that promises “low fat” or “reduced fat” foods.